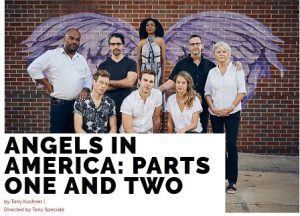 A towering epic that unveils new depths with each passing year, Tony Kushner’s Tony- and Pulitzer Prize-winning masterpiece arrives on The Rep’s stage for the first time. The AIDS epidemic is the flashpoint in Kushner’s swirling tapestry of American culture, myths and spirituality. Navigating this maelstrom are Prior Walter, whose prophetic visions lead him toward an uncertain destiny, Joe Pitt, a devout and painfully closeted Mormon, and Roy Cohn, a lawyer whose AIDS diagnosis forces him to face a lifetime of misdeeds. These twin plays’ vision of a wounded and chaotic nation struggling toward redemption is more urgent than ever.

Featuring Kushner’s revised script that fueled acclaimed revivals on Broadway and London’s West End, The Rep will present both parts of Angels in America in a rotating “rep” schedule throughout the run. That will include special marathon days with both parts performed back-to-back.

For information or to purchase tickets, go to http://www.repstl.org/events/detail/angels-in-america-parts-one-and-two or call the Box Office at (314) 968-4925.